The History of Ladore

Ladore has a very interesting history – this is a view of Ladore’s past – beginning in the mid-1700s. 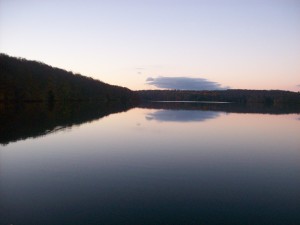 Only Native American Indians lived in this area up to 1749.  In 1749, about 300 Indians of the tribes of the Onondaga, Mohawk, Cayuga, Tuscarora, along with the Seneca, Shawnee, Delaware and Mohican, realizing that the white race was gradually pushing them away from their ground decided to sell what is now Wayne, Pike and eight adjoining counties to the Proprietary Government for 500 pounds of Sterling, valued at about $2,500.00.

The first settlers to this area came from Connecticut in 1775.  In 1780, James Wilson, one of the signers of the Declaration of Independence, established a weaving mill on the banks of the Wallenpaupack River.  Linen was woven from flax at this mill.  In 1790 Colonel Asa Station from Connecticut was the first settler in what is now the Borough of Waymart.  His nearest neighbor was nine miles away.  In 1805, he built the first sawmill in the county.  It was known as Stanton’s Pond.  This became the site for what is now known as Lake Ladore.  The stone foundation of the sawmill is still visible about 300 feet north of the Lake Ladore Dam. 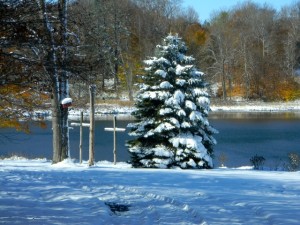 In 1780 the average population in the region was less than two people per square mile, an area about the size of Camp Ladore.  By 1825, this same acreage probably supported two families.  The old stone foundations of log cabins and the stone walls at Ladore give support to this belief.  The many stonewalls through Ladore served to fence farm animals.  Most of the stones used in these walls had to be removed from newly cleared land so that the settlers could plow their fields with oxen, then later with mules and horses.  The “Big Red Oak”, five and a half feet in diameter, is believed to be a tree that was left standing near the site of a family cabin and barns.  All the other trees were removed to provide fields for cultivation.  This tree was over 200 years old and in 1989 it was struck by lighting and is no longer standing.

Anthracite coal played an important role in the development of this great country.  About 1809, Jess Fell of the Carbondale area began to use coal in his blacksmith shop and in his fireplace grate to heat his home.  The Wurts Brothers of Philadelphia moved to this region in 1816 and began to mine coal.  New York City was getting much of its coal from England at that time.  New York City was to become the big market for anthracite coal.  The brothers bought land containing coal for as low as fifty cents an acre.  They began to think about a canal to transport the coal and in 1823 they contacted surveyors for a canal to run from the Delaware River to what is now Honesdale.  Construction of the Delaware and Hudson Canal began in 1825.  It became operational in 1828.  There were 109 locks; each was fourteen feet four inches wide and ninety feet long. 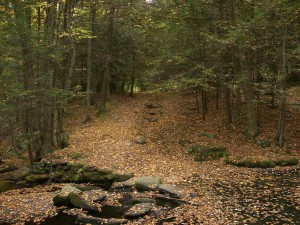 A section of the old Bethany Turnpike from Ai-Yuk-Pa to the North Amphitheater is part of the present road systems for Ladore.  An old stone wall can be seen along the west side of the turnpike which runs northeastward toward Keen’s Pond.

The Gravity Railroad that connected the coalfields of the Carbondale area with the D&H Canal was to become one of the greatest engineering accomplishments of that time.  In 1826, the D&H Canal Company decided to build the “Gravity Railroad”.  It began in Carbondale at an elevation of 1,200 feet and rose to 1,907 feet at Rix Gap (which you can see from Ladore).

From 1829 to about 1885 hundreds of thousands of tons of coal moved up and down the 19 planes of the gravity.  Mules along the 108-mile canal towed the 40 to 45-ton capacity boats.  The locomotive railroad was completed about 1850.  That ran to the Hudson River, so in 1885 the Gravity Railroad was abandoned.  A section of the old Gravity Railroad is still visible just east of the Hilltop Cabins descending into Waymart. Another section can be found west of VanAuken Creek between Keen’s Pond and Lake Ladore Dam.

In the winter the canal was frozen so during this time coal was weighed and unloaded at Weigh-Mart.  Huge piles of coal weighing hundreds of tons would be reloaded and hauled to Honesdale.  Waymart became a thriving small town because of the Gravity Railroad.  It was the weigh station, the coal storage area and home for several hundred people who built, maintained and operated the tracks and the stationary steam engines that were located at each of the planes.  Honesdale, likewise grew as a prosperous town because it was the terminal point for the railroad and the beginning point for “coal boats to tidewater;” from Honesdale to the Delaware River then on to the Hudson River and to the final destination New York City.

Water supplies or “feeder lakes” had to be constructed in order to assure adequate water level in the canal.  Stanton’s Pond (Lake Ladore), 265 acres, was constructed in 1823.  The D&H Canal Company had brought 200 Irishmen to America to mine coal but the mines were not ready; so the company put the men to work building Stanton’s Pond.  Water from this pond was released to supplement water in the boat basin in Honesdale. 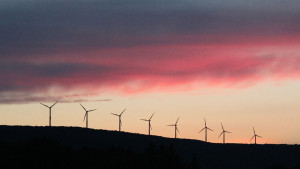 Passenger service was inaugurated in 1877 from Honesdale to Carbondale.  Because of the unusual scenic beauty of the Moosic Mountains (Fairview Area) and Stanton’s Pond, this area quickly gained fame.  During this time Stanton’s Pond became known as Lake Ladore.  The Lake Ladore Improvement Company developed what was known as an excursionist’s delight.  Scattered through the shady groves at Ladore were refreshment stands, summer kitchens, swings, and seats. One of the major features was the Dance Pavilion, which is no longer standing. The Ladore Performing Arts and Recreation Center now stands in its place.  The Carousel Dining Hall is a building from that era which housed the carousel for the park.  Visitors could get off the open air passenger cars where  Hilltop Cabins are now located and could walk to the Pavilion, or some passengers would unload from below the dam and ride a tern-wheel sightseeing boat from the dam to the dock at the Carousel. 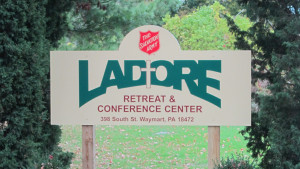 In 1898, the canal saw its last boatload of coal and the Gravity Railroad had given way to the steam locomotive.  The “Amusement Park” at Lake Ladore operated until around 1915.  Around 1920, St. Rose Catholic Church in Carbondale converted the excursion area into a summer camp and named it “Camp Coffy”.  Then in 1935 two Jewish women acquired the property and began the operation of a summer camp called “Camp With -A-Wind”.  The Pendel Division of The Salvation Army bought the camp in 1967 and operated its first summer camp in 1968.

In the early 1970s, the Beam Farmland was purchased on the north end of Lake Ladore for the purpose of constructing a conference center, initially for senior citizens and Salvation Army groups.  The lodge and conference center was completed and opened for business in June of 1975.